All reasonable steps: a reminder to employers

A recent Full Federal Court of Australia decision demonstrates the extent of an employer’s role to prevent sexual harassment at work.  The Full Court examined the defence of all reasonable steps, concluding that an employer’s responsibility extends beyond the simple existence of policy and the mere provision of training.

On 20 February 2020 the Full Federal Court allowed an appeal by a worker against a finding of the primary judge that her employer was not liable for the sexual harassment she experienced at work.

The appeal was successful, in part, due to the six-year delay by the judge in delivering his decision rendering the decision “unsafe”.

Critically, while finding the employee was sexually harassed, the primary judge exonerated the employer saying:

“... I decline to find that the [employer] is vicariously liable for the sexual harassment perpetrated by the [perpetrator].  I find that, by developing the policy and conducting training sessions, the [employer] took all reasonable steps to prevent that act occurring.”

Discrimination legislation provides that an employer is vicariously liable for the conduct of its employees unless it establishes it “took all reasonable steps to prevent the employee ... from doing” the prohibited act.

“The word “all” is significant.  It is not enough for the employer to demonstrate that it took some of the reasonable steps available to prevent the employee from doing the unlawful act”, the Full Court said.

61. However, it is unnecessary for the employer to take all steps necessary to prevent the employee ... from doing the relevant act.  What must be taken is all steps that are reasonable to take.  What steps are reasonable will depend upon the whole of the circumstances, including the size of the organisation, the nature of its workforce, the conditions under which the work is carried out and any history of unlawful discrimination or sexual harassment.

62. The reasonable steps taken must be “to prevent” the employee ... from engaging in the unlawful discrimination or sexual harassment.  The focus is upon preventative steps taken before any relevant act occurs.  However, in some circumstances, the way a complaint is dealt with after the act may have relevance to the question of whether all reasonable preventative steps were taken.  For example, a failure by an employer to comply with policies for investigating and dealing with complaints may be reflective of a workplace culture that tolerates unlawful discrimination or sexual harassment.

63. Further, the focus must be on what steps would or might prevent an employee from doing the relevant unlawful act.  A criticism that may be levelled at some of the cases decided by anti-discrimination bodies in this area is that they tend to focus upon perceived deficiencies in policies and training without adequate consideration of whether those deficiencies could have made any difference to the doing of the relevant act.

In this case, and to avoid vicarious liability, the employer put into evidence its policy and training slides as the evidence of the reasonable steps taken by it.

The Full Court found the perpetrator was neither made aware of the zero-tolerance policy nor that disciplinary action would be taken with respect to such conduct.  Further, the effectiveness of any training was also brought into question where the sexual harassment occurred four days after the training.

The Full Court has said the all reasonable steps defence requires substantial evidence.

What must employers do

Policies are important.  “The significance of effective policies and training includes that they deter unlawful discrimination and sexual harassment”,  the Full Court commented.  But policies are only the start of all reasonable steps.  Relying on the mere existence of a policy will not be good enough: Menere v Poolrite Equipment Pty Ltd [2012] QCAT 505.

Training is the next obvious step.  Employers need an education program: STU v JKL (Qld) Pty Ltd [2017] QCAT 505.  As identified by the Full Court, a relevant factor in determining whether reasonable steps were taken is the conformity of training and policies with the Australian Human Rights Commission guidelines on Effectively Preventing and Responding to Sexual Harassment.  Importantly, policy and training are just the beginning.

Past cases have given us good indicators on what are reasonable steps.  These cases and their lessons include:

Steps to take after an investigation (other than discipline)

As is apparent, how employers respond to a complaint is important in showing all reasonable steps have been taken.  Equally, the management and response to an investigation and its outcomes are important.

Steps that need to be taken, include: 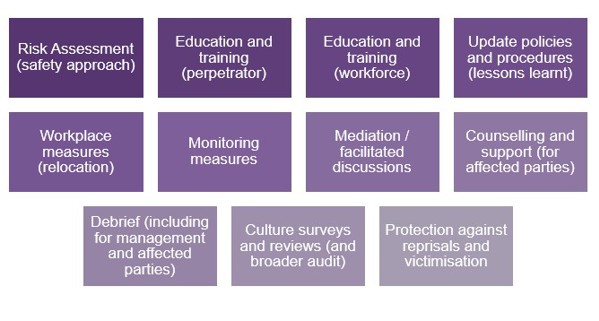 Good HR practice would be to ‘check-in’ with the complainant (and or perpetrator, if not dismissed) and the business unit, routinely in the 12 months after the investigation to ensure normality has returned and lessons learnt have been implemented.

At a more holistic level, our five hot tips on managing a complaint of sexual harassment are: