We look briefly at the ins and outs of the new CSF Regime.

What is Crowd-Sourced Funding?

CSF is the funding of a venture by a large number of people. It is a tool for raising capital online, and offers companies the ability to cast a wider net to reach both sophisticated and non-sophisticated investors.

How does the CSF Regime work?

Who can raise funds?

(a) are not investment companies; and
(b) collectively satisfy:

What if you are not a public company?

Since only public companies can (currently) be Eligible CSF Companies, start-ups and other small-scale enterprises will need to convert to public companies in order to access the CSF Regime. In order to lessen the burden of going public, the CSF Regime creates termporary concessions from certain public company corporate governance and reporting requirements for any company that registers as or converts to a public company after 29 September 2017. The concessions include the waiver of the obligation to hold AGMs, to have financial reports audited, or to provide hardcopy financial reports to shareholders in the first 5 years of registration as a public company.

What can a company do under the CSF Regime?

Under the CSF Regime, an Eligible CSF Company can make a CSF Offer. A CSF Offer must:

Retail investors (or people who are not described as Sophisticated Investors) themselves may only invest up to $10,000 in a company in any 12 month period.

How are CSF Offers made?

A company can only have one CSF Offer on issue at any one time.

A typical CSF Offer follows the process outlined below: 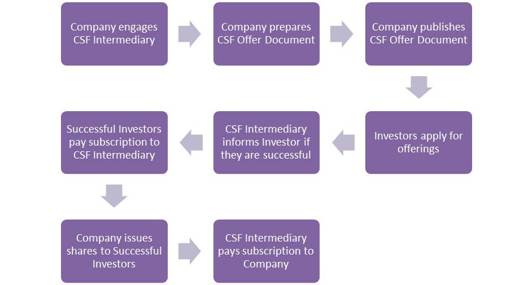 A CSF Offer will be open when first published, and closes at the earlier of:

Various restrictions apply to the advertising and marketing of CSF Offers.

What is a CSF Offer Document?

A CSF Offer Document must contain the following:

1. an investor risk warning;
2. information about the Company, such as:

(a) key information about the Company, company name and ACN, registered office, and place of business;
(b) information on key individuals (eg directors), including their names, skills and experience, and criminal and solvency history; and
(c) information on the Company’s business and financial records, including the nature of its business, organisational structure, debt/equity structure, consolidated financial statements, business strategy and model, and the main risks facing the business;

3. information about the CSF Offer, such as:

(a) what shares are being offered, and what rights are attached to them;
(b) when the CSF Offer opens and closes;
(c) the minimum and maximum amount being sought, and how the funds are to be used;
(d) if money will be, and the amount to be, paid to a current or proposed director, the CSF Intermediary, a promoter, a shareholder with more than 20% of shares, or related parties; and

4. details of investor rights (eg 5 business day cooling off period) and any concessions available to the Company.

A CSF Offer must not be misleading or deceptive. Penalties may apply for defective CSF Offers which do not meet the requirements set out under the legislation.

Other thoughts and comments

Australia’s CSF Regime has had mixed reviews when contrasted with CSF regimes in other countries. The main criticism of the Australian Regime is that it is only available to public companies. In New Zealand, all companies can access CSF, whereas in the US, UK and Canada, only a small proportion of companies are excluded.

However, the Australian CSF Regime does have some benefits over those in other countries – for example, in Australia, we have a $5m cap on equity fundraising in 12 months while in NZ there is a $2m cap.

A bill to enable proprietary companies to access CSF without needing to transition to a public company has been introduced into parliament.

Ultimately, the question for businesses looking to CSF is whether they take the leap now and commit the necessary time and resources to access the current CSF Regime, or wait for further iterations of the CSF Regime which might be a better fit depending on the current stage of development or growth experienced by the business.