‘Smart’, ‘Visual’ and ‘Other’ Work Contracts – the new frontier of simplified labour engagements

The new world for contracts

The old world of contracts written in words on paper is giving way to the new commercial online world – driven not by trust, respect and duties, but by continual improvements in transactional time and cost efficiency, with little or no need for agreement in a human language.

Transactions are not expressed in human language, but in computer code executed electronically in digital binary switching, on or off, in nanoseconds (at least for now before biological data storage and the next quantum computing leap).

This works well with most commercial contracts, where ongoing trusted relationships are not essential or can be substituted for reliable computer processes to create certainty.

But how suitable is it not to use human language or machine processes for contracts involving human labour?

Employment contracts, for example, have long been recognised as a special form of contract – not transactional in nature, but couched in human language bound by a special ongoing relationship of trust and duties of care and obligation.

It is of course possible to have unwritten work contracts. They are formed every day on a handshake or even the click of a mouse. However, it is commercially prudent, and in many respects legally necessary, to express important terms and conditions in writing. The law can also step in and imply essential terms into work contracts to ensure a workable relationship and business efficacy.

Despite reformations in legal drafting styles over the years, with a modern push to simplify individual and collective work contract terms and conditions, work arrangements are still typically documented in interlocking layers.  There is a contract with, organisational policy, industrial awards, enterprise agreements, legislation, regulations and codes of practice.

Many industrial and employment disputes concern the proper legal construction of written words, and how these words, when read in context and within layers of regulation, can be given grammatical and ‘ordinary meaning’ certainty. This task is ultimately determined by courts or labour tribunals based on accepted legal rules of interpretation.

There is now an emerging interest in simplifying work contracts to make them more certain or more efficient, but with little or no written words at all.

This interest has given rise to ‘visual contracts’, ‘smart contracts’ and ‘digitally implied’ work contracts that use little or no human language.

This is a new frontier for human resource professionals which poses many interesting and serious legal and social questions.

Historically (and still today), many work contracts were simply formed by spoken words and physical gestures, and recorded in memory.

But physical interactions are susceptible to cultural and linguistic differences, the frailty of human memory and erosion of trust during the working relationship.

‘Reducing’ agreed terms to writing is a sensible way to record the terms of agreement and plan the relationship. But it does not capture every nuance or all possible eventualities. Usually, only the essential terms of engagement are agreed in writing.

Most work contracts are framed in detailed, but simple language designed to attract and retain talent. However, they still need to rely on precise legal language to cover such things as entitlements guaranteed by statute or to protect legitimate business interests on termination of the relationship. For even the most skilled legal drafter, achieving this balance with an economy of words is not easy. Complex legal concerns are usually transcribed using well-worn and tested words, familiar to lawyers and judges, to provide certainty in regulating the work arrangement.

Visual work contracts are being embraced by some employers in Australia as a way to enhance the engagement process and better reflect corporate values.[1] Communicating complex ideas simply is seen as setting the right tone as an employer of choice.

Visual contracts simplify complex employment law using pictures and graphical symbols. They are already used in industries where there are literacy or other challenges to comprehension.[2]

For example, a lawyer in South Africa has partnered with an industrial safety graphics company, Jincom, to produce this fruit picking contract for ClemenGold orchards:[3] 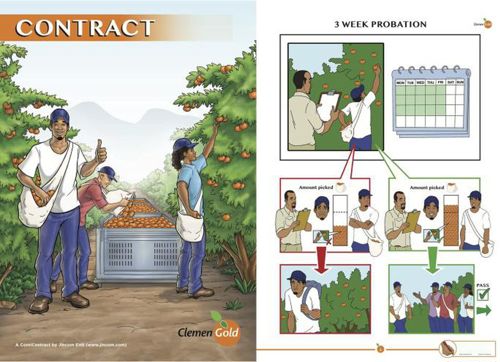 For the visually impaired, illiterate or for people with intellectual impairments, visual work contracts may be easier to grasp than written contracts.

Even better, visual contracts don’t need to be static. Graphics can be animated or in the form of videos, giffs or Meme’s.

But pitfalls still exist, including new and complex questions of interpretation. If a picture says a thousand words, how many possible permutations in interpretation can there be?  A simple emoji can be easily interpreted differently by different people. Over-simplified graphics may not allow room for shades of meaning that written communication makes possible.  Imagine the possible layers of meaning in a digital work contract with animated graphics or video.

Another more recent development is the use of smart contract technology, to improve efficiency and reduce the cost and complexity of labour engagement.

Smart contracts are evolving quickly and exist in digital computer code in a networked online world. Parties to smart contracts must trust the integrity of software code to articulate the intended working relationship.

Smart automated contracts have actually existed for some time. For example, when you use a vending machine an unwritten agreement is created. For a defined input (you insert a coin, say), there is a defined output, such as a drink or snack. Little trust or language is needed to complete the transaction. Many online transactions similarly respond to simple user inputs to complete contract terms, which are accepted by clicking an acceptance box.

Written agreements can also be formed on completion of a software driven outcome – think Uber or Airtasker. There may be written and unwritten labour agreements in a three-way relationship between the platform provider, the source of labour and the end user.

In some cases, smart contracts are formed where the software resides on a blockchain, public or private distributed ledger, and executes without human intervention. Such contracts typically involve commercial transactions such as retail leasing[4] or agricultural systems.[5]

The real challenge arises with work contracts that exist only in machine readable computer code. Such smart contracts can be executed entirely without human intervention and once entered into cannot be changed because the automatically written code is the contract.

A willingness to work may be reduced to work standards and quality criteria stored on an encrypted data key or smart phone. The data may be accepted by a software robot tasked with searching out and matching ‘worker’ data with the ‘work product’ data preferences of an online employer. All that may signal the start of a relationship is an automated diary entry to deliver work by a specified date to a designated location.

There is a new relationship created when payments for labour services proven to be rendered electronically are made on a distributed ledger system with no centralised control by an employer.

A legally enforceable contract requires a valid offer and acceptance and valuable consideration, illustrated below.[6]

While regulation of the employment contract is embedded in common law doctrines and principles, it is also subject to various State and federal statutes and regulations in a symbiotic relationship.[7]

Terms of the contract of employment can be expressed in writing or implied by law. Contract terms inconsistent with and less than award or collective agreement terms, or minimum legislative conditions have no effect.

The law can also deem or imply that certain work contract arrangements exist, despite the written or unwritten intentions of the parties. For example, if a written independent contractor arrangement actually satisfies the legal indicators of employment, the law will look behind the form to deem it in substance to be a contract of employment.

Therefore, in theory at least, the law seems well equipped to assess substantive work arrangements in any contract – visual, smart or other.

But challenges remain. If the language of smart contracts is computer code, for example,  how does one understand the code which is the contract?

Is it socially acceptable to reduce work contracts to a form of commercial transaction, where the terms, once accepted by a click, are locked into a blockchain, not open to change or challenge?

If smart contracts conform with the law at the time they are made, is it acceptable to have to create a new legal relationship, by recoding, to comply with future changes in the law?

If there is ambiguity in a visual contract, how do parties resolve any dispute or misunderstanding?

It seems unsatisfactory to have to call on experts in computer languages, machine learning, distributed ledger systems, graphical standards, or artistic appreciation, as well as lawyers, simply to discern work contract terms. However, this is a possible scenario.

If the intention of smart work and visual contracts is to create more certainty and efficiency, then they need to work in a practical sense, across cultural and technological divides, with minimal risk of dispute or disagreement.

This is the new frontier for human resource managers and those called upon to interpret the true nature of labour contracts and the intended terms of a work relationship.